Just over 30 R8 GTs came to the UK, but this one has been transformed into an 800bhp, supercharged track weapon thanks to supercar specialists RE Performance. Davy Lewis from Ultimate Supercar explains why it’s such a formidable weapon…

As I slip down into the R8’s carbon-fibre passenger seat and fasten my six-point harness, my driver, Ricky Elder of RE Performance gives me a mischievous look. “Are you ready?” he asks. That’s a good question. You see this isn’t just any R8. For starters it’s a rather desirable GT model, of which just 333 examples left the factory at Ingolstadt, with a mere 33 reaching the UK. Priced at a hefty £142,000, these uber R8s came with more power (552bhp), less weight (-100kg) and featured unique styling, including front winglets, oval tailpipes and a fixed rear wing. It’s fair to say they’re as rare as… (Insert your own hens’ teeth or rocking horse analogy here).

The second reason to pause for thought is that we’re at Bruntingthorpe Proving Ground, near Leicester. In case any of you have been living in a cave for the last 20 years, it’s an ex-WW2 airfield where it’s possible to achieve trouser-worrying speeds without getting your collar felt by the Rozzers. Still, that’s no big deal, really is it? Well, perhaps not. Except this V10 Coupe is packing a rather hefty 800bhp, thanks to the VF Engineering supercharger. And that’s not all. Because this particular car belongs to one of RE Performance’s best customers, a guy who loves track days and has even entered Time Attack in this very car. Consequently, it goes rather fast thanks to the chassis upgrades, £10,000 adaptive rear wing (yes, ten-grand; that’s not a typo!) and sticky Michelin Pilot Cup 2 rubber.

This is basically an R8 that’s been turned up to 11. It’s harder, faster, more focused, yet has a fine balance that almost defies belief. With over 100kg removed, it feels much more nimble and changes direction with alacrity. Heading into the esses at well over 100mph, Ricky hits the brakes and the carbon ceramics scrub of speed with devastating efficiency, making the R8 squirm under pressure as the Pilot Sport Cup 2s do their thing. I’m thrown forward as the G-force hits, then flung sideways as we mount the kerb, first to the left, then again to the right, before exiting wide onto the main straight. It’s startling stuff.

I’ve been out in countless quick cars over the years, but this thing is already starting to make me feel a little light headed with its ability to change direction so rapidly. Part of the reason is that there’s virtually no body roll and it feels like we’re cornering almost flat. Clearly a lot of work has gone into making this car handle like no other R8.

The R-tronic gearbox may be criticised for its recalcitrant nature and it’s light years behind the superb S-tronic unit fitted to the Gen 2s, but at the hands of an experienced track racer, it still allows us to make rapid progress. “The trick with the R-tronic ’box, is to treat it almost like a manual and lift slightly when you change gear,” explains Ricky, which he ably demonstrates as we head towards a sweeping right-hander, eliciting a delicious bark from the V10. The 5.2-litre unit is one of the finest sounding engines ever made and delivers that authentic racecar howl, something that’s amplified as we’re using the full rev range on track. But there’s more. Ricky has fitted a super-lightweight Akrapovič Slip-On Line titanium exhaust system, which not only delivers a thrilling race-car sound track when you open the taps, but is refined enough to pass track day noise tests. Although no longer available (they do cater for the Gen 2, plus Huracan), this sublime system releases the full performance potential of the V10 and is the perfect accompaniment to the supercharger. The VF Engineering set-up produces an extra 250-odd bhp, which makes a significant difference to performance, in partnership with the RE Performance custom ECU map.

Power delivery is impressive on a stock R8 GT, but this is on another level. Hammer the throttle in pretty much any gear and this thing just goes. The supercharger delivers a very linear response and the car behaves almost as if it’s a larger, naturally aspirated unit. The shove in the kidneys as it accelerates is intense, and although there are no figures available, I’ll eat my hat if this thing can’t reach 60, from rest, in less than three-seconds.

One thing that has been measured is the top speed. The owner recently competed at the V-Maxx 200 event, where this hard-charging R8 managed a highly creditable 206mph.

“The client lives in the Bahamas, so he stores the R8 in the UK, along with his other toys and uses it for track days,” says Ricky. “It came to us in 2016 as a totally stock car and we’ve carried out all of the work to get it to where you see it today.” Every aspect has been carefully looked at in order to achieve maximum performance and ensure it all works as a package. The KW Clubsport coilovers keep it planted on track, ably assisted by uprated ARBs and rear toe arms. The Pilot Sport Cup 2 tyres offer prodigious grip, while the adaptive rear wing provides greater downforce, the faster you go.

Inside, this thing feels very special thanks mainly to the gorgeous custom Alcantara and carbon steering wheel and those uncompromising, but surprisingly comfortable carbon seats. The set of larger and more tactile paddle shifters (in carbon, of course) make a huge difference to the driving sensation. With the half-rear cage and six-point harnesses, it’s how you imagine a Clubsport edition R8 might look. The track theme is reinforced by the lightweight battery and fire suppression system also fitted inside.

At a recent Akrapovič track event, Ricky took several high-profile UK tuners out for hot laps of Bruntingthorpe and every one of them came back with huge smile on their face.

For me, the best part about this GT is that it still feels like an R8. The character hasn’t been lost and the upgrades have maintained the innate drivability, which was central to Audi’s plan when they designed it. Make no mistake, this thing is an absolute weapon on track and few stock supercars could live with it, but you can also drive it home afterwards. No reliability issues, no dramas. It is a very special car and a credit to the prodigious talent of Ricky and RE Performance. 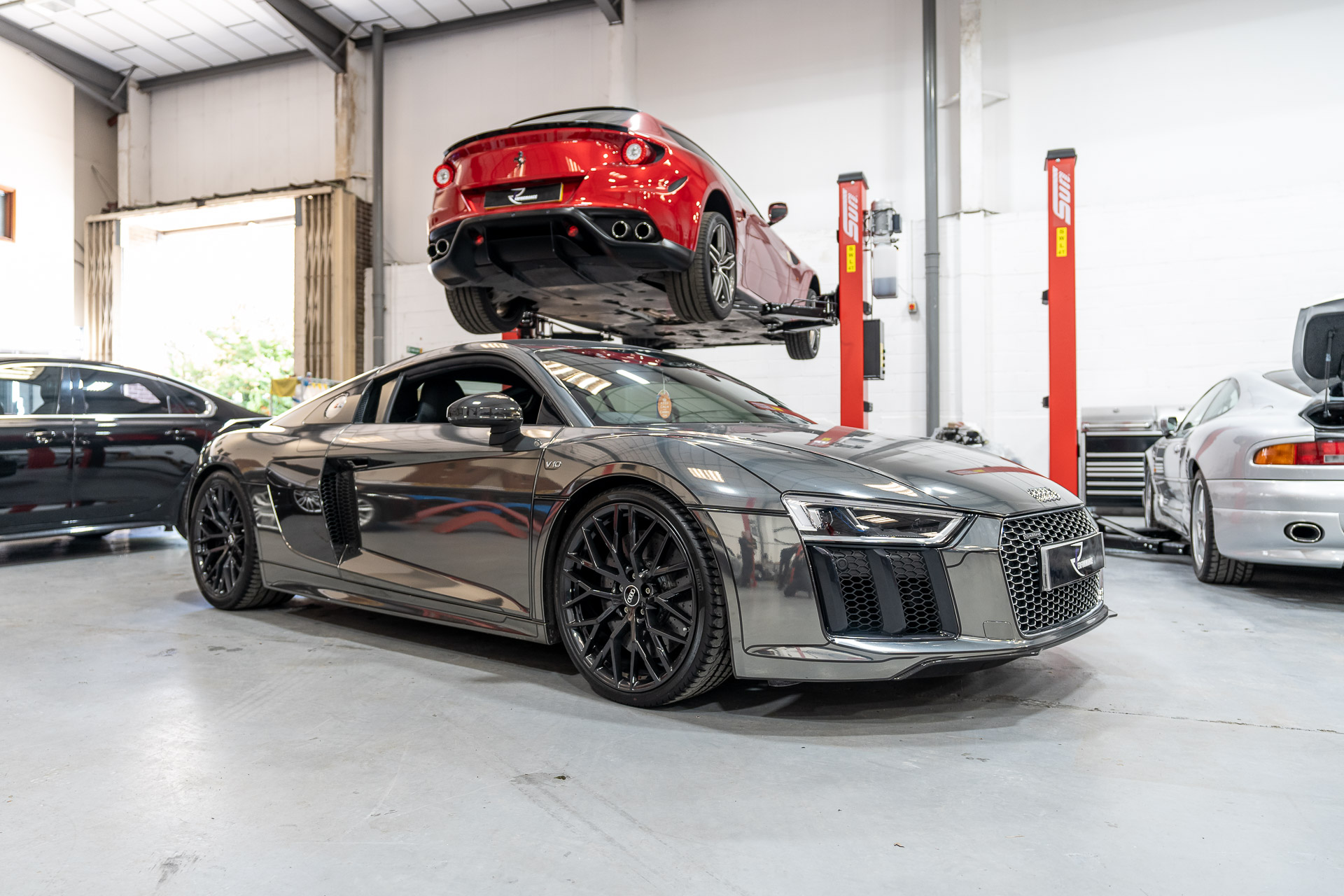 This week, we’ll be starting a VF Engineering supercharger installation on an R8 V10 Plus. This high-quality, comprehensive setup arrived at the workshop last week and we’ve already taken a good look at it and filmed an unboxing video which we’ll share shortly.

The kit includes everything that’s required for a full drive in drive out installation to take the already potent 5.2-litre V10 engine to a serious 800bhp.

The supercharger was specified in Porsche Riviera blue, to match the calipers from the ceramic brakes, which we have already removed and sent away to be painted.

We expect the installation to completed this week and will keep you updated with photos and video along the way. Then, once it’s done, we’ll be taking it for a test drive to show the difference the VF Engineering charger makes to the performance.

In the meantime, keep checking our social media channels for updates including images and videos.